The source code for the Arduino Sketch (firmware) for the SeeStar camera is available as part of the SeeStar repository. I struggled a bit to build an deploy the code to the Arduino Pro Mini. The SeeStar documentation says you should use the online IDE from Codebender. I had some issues getting it to work, so after filing a bug on the SeeStar repo software developer on the SeeStar team Thom Maughan uploaded the code and library to the repo.

The way you configure the SeeStar camera to set interval length is using the serial port. When you connect to the camera using serial, you get some version information etc. You can also issue commands to test different features, such as turning on and off the GoPro or LED light.

I had some challenges having the camera register my commands. The SeeStar firmware use a SerCmd library to handle commands entered sing the serial port. The library lets you assign commands to handler functions like this:

From the Arduino IDE you can connect to the board using the Serial Monitor tool: 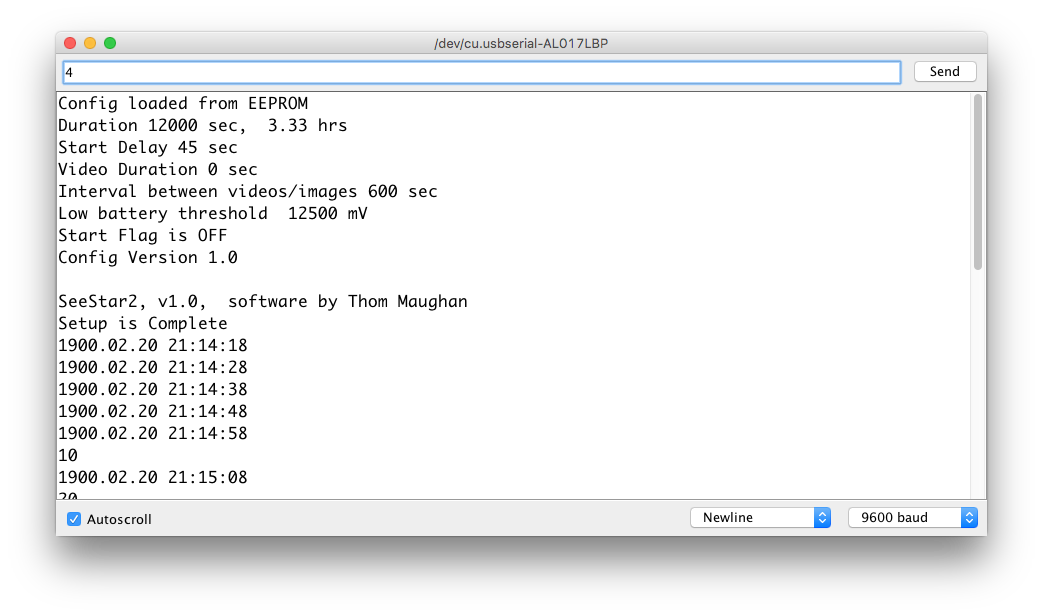 The problem I ran into was that commands wouldn’t execute when I typed them in and hit enter. After doing some debugging, looking through the source code of SerCmd.cpp I realized that the command terminator character was set to \r, (Carriage return), while the Serial Monitor defaults to \n (New line). You can change the delimiter in Serial Command tool, and after doing that I was able to issue commands.

The SeeStar is connected to the GoPro camera using the Hero bus connector. The GoPro supports accessories such as external battery and LCD screen though backpacs. Using that port, and setting pin 12 to HIGH for 100ms will turn the camera on. I was able issue the test command to turn on the camera, and it was quite satisfying hearing the beep of the GoPro turning on!